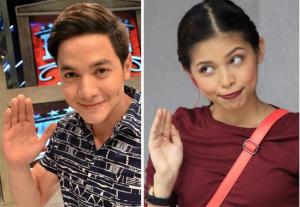 The “Aldub” Sensation has been going on for more than a month now in the longest running noontime show Eat Bulaga! since that fateful moment when the protagonists in the “kalyeserye” so called started exchanging charming greetings between split screens and what used to be live locality encounters lorded over by the triumvirate of Paolo Ballesteros, Wally Bayola, and Jose Manalo. The success was accidental, and the “lead” couple known today as “Aldub”—up and coming matinee idol Alden Richards and Dubsmash celebrity Maine Mendoza—suddenly became the talk of the town after Bayola’s character Lola Nidora started to wear the villain’s hat to prevent the romance, while at first seemingly raising the conservative “sa tamang panahon” card.

Mendoza’s online following might have also made the “accidental romance” trend, as social media discussions definitely propelled the popularity of the segment. Richards’ growing following may also have contributed to the rise of this new “love team”, where he plays the “bae” next door evoking the usual “kilig” energy, and thus providing the natural chemistry with Mendoza. There is much to explicate about this event on many levels, and I will try to work on some of them in this essay. While many “experts” have already weighed in on the phenomenon, I will focus on its televisual value and attempt predicting its directions.

The emerging “kalyeserye” genre—at once taking off from the teleserye in the middle of daily, “pedestrian” living—has provided a new shot at life for the genre of the noontime show, known for its variety, but is observably reaching a plateau in all its tricks and treats. Eat Bulaga’s competition, It’s Showtime!, is currently dominated by Vice Ganda, with some help of course from the antics of Vhong Navarro, Anne Curtis, and the notable Ryan Bang and Kim Atienza, who are performing well in their lip reading contest segment that exoticizes Korean culture. Eat Bulaga! meanwhile continues to innovate, and for quite a while now has been bringing its show to various places through its “All For Juan, Juan For All” community bash, where the show also does its signature “Sugod Bahay” promotions, giving out prizes to lucky community callers.

Both Eat Bulaga! and It’s Showtime! have transcended their initial formats from their first encounter, and the plot continues to thicken, this time with a challenge that emerged from something very random and rather unplanned. Richards and Mendoza—totally unrelated because of their different segments and even separated by the studio and on location set ups—have suddenly started a story that the producers saw as potentially interesting to pursue. De Leon was prophetic when he started calling the “phenomenon” a “kalyeserye”, as the event indeed propelled a plot that may be “serialized” and followed by viewers. Eventually, as in typical teleseryes, it started to introduce characters—like Richards’ Lola played in cameo by Celia Rodriguez; the mystery caller who seems to be extorting money from Lola Nidora in exchange for keeping a secret; and much lately, Manalo’s Frankie Arinolli, the third wheel in the “Aldub” romance.

The virtue of the “kalyeserye” is its randomness, and its “found”, almost incoherent story residing within the structure of the noontime show, has opened a new possibility for Eat Bulaga’s daily fare. In contemporary times, two televisual genres dominate the airwaves—the variety show, where Eat Bulaga! basically falls under, and the teleserye. It is the first time we have seen what seems like a fusion of both through the “kalyeserye”, though the phenomenon, as well as the usual stuff noontime shows are made of, have always been reminiscent of the “sari-sari” format of the bodabil of yesteryears. However, the mere fact that the romance was unplanned became particularly refreshing, and definitely a respite from the usual drama of promo winners crying their hearts out before being granted their prizes, as if sob, poverty stories are requisites. We can all blame Willie Revillame for “founding” this entertainment model—that of “poverty pornography”—as much of this has been staple during lunchtime.

That was, until Mendoza, Lola Nidora’s ever loyal Yaya Dub, got a bit distracted upon seeing Richards’ smile which showed those endearing “national” dimples. The segment, which also hosts a slapstick “Problem Solving” portion naturally reformatted itself to become lunch hour’s newest craze, where the aforementioned triumvirate and the Aldub couple are to be seen on their toes daily exchanging dialogues in teleserye fashion and “dubsmashes” of love songs by the star-crossed lovers. Like the TVJ—Eat Bulaga! main hosts Tito Sotto, Vic Sotto, and Joey De Leon—in their heydays, the “JoWaPao” (an acronym of the first names of the triumvirate) show their mastery of improvisation and popular humor and push the envelope by embodying other characters aside from their usual selves. The Aldub “kalyeserye” would have not been sustained without the three’s wit and natural gift of gab.

However, this “kalyeserye”, to my mind, is not really being followed for its story, though the network and the producers spin specialists attempt to depict it as becoming a real teleserye in their follow up social media and publicity operations. The humorous senselessness of it all is the point, the incoherence, the randomness, and these, I hope, should not be lost on the show, which must be finding itself today being gifted by this opportunity to renew its lording over the ratings. But all things considered, where is this “kalyeserye” really headed? I see only two possibilities after its being exhausted by the noontime show, which historically introduced countless innovations, as well as a good number of sensations. The first one is to go on and risk being eventually dropped by the audience altogether. The second, which may be more palatable for the producers, is to begin thinking about a grand, top-rating, ending.

But first, some personal conjectures before the predictions. What has led us to this noontime madness, and what does it suggest about our changing viewing behaviors? Are we now running away from the “real” that we have paradoxically turned to the “kalyeserye” to be entertained? And what do we make of the fact that its randomness, that is, its proximity to the real, is also something slowly being shaped, orchestrated, being turned into fiction, the province of the teleserye. Which “reality” do we really turn to now when all that seems to exist is the “unreality” of things, even of the everyday? The “Aldub” sensation resides between reality television and the teleserye, which it begins to aspire for, perhaps because it has to stand true to its being a derivative of the Filipino soap opera genre.

Which brings me to the most logical but looming possibility: like all else, the “kalyeserye” will have to die soon. It is fated to end, as it is slowly becoming an odd thumb to its segment, if the producers continue to pursue what it is really not: a teleserye. It is more of a serialized sketch, where various complications are applied, but is rather self-reflexive as it laughs at itself more often than not and has a blurred distinction between performance as acting out, and performance as mere free play. Typically postmodern, if one asks. The randomness and incoherence of the act tend towards the latter; the former is basically the turf of the teleserye. The noontime show in general cannot afford to drown in a perpetrated sensation such as Aldub, unless it yields to the teleserye form to be finally conquered by it. Of course, that will never happen.

In the past we have seen sensations come and go in Eat Bulaga! like the segment dancer Gracia and the Sex Bomb Dancers; even the fixture Bulagaan classroom jokes session gets to be displaced quite recently by the various new segments of the show, like Bulaga Pa More, where singers are pitted against each other to belt out pieces while performing other “challenging” tasks, as implied by the trending phrase “pa more”. The “kalyeserye” is but one pleasantly confusing moment in the noontime show format, where the genre experienced a crisis in comic proportions, and was redeemed by it nevertheless. It would have to end however, and eventually, Lola Nidora’s “tamang panahon” would need to come right on cue as the dubsmashing couple pursue a fictional happily ever after.

Some might find me a bit severe, but knowing how a noontime show works after practically a lifetime’s worth of watching Pinoy television, a hit is usually ended best during its climax, as people are still at it. Yes, discourse is endless, but there are other pop culture texts to keep up with, like the real teleseryes, and the political teleseryes that are still or are yet to unfold, pacing 2016. The Aldub “kalyeserye” is an interesting reprieve from all the teleseryes we have been following, from Pangako Sa ‘Yo’s fictional town of Talimpaw, Forevermore’s La Presa which for a while became a tourist disaster, to the august halls of the Senate during blue ribbon committee hearings. There’s hope, love that conquers all, kilig, and everything dramatically pedestrian in the “kalyeserye”, but it will remain to be what it is, a “kalyeserye” that is but merely a segment to the larger body of the innovative noontime show format. It was an interesting experiment, nonetheless, best done once, not to be ever repeated, much less copied.