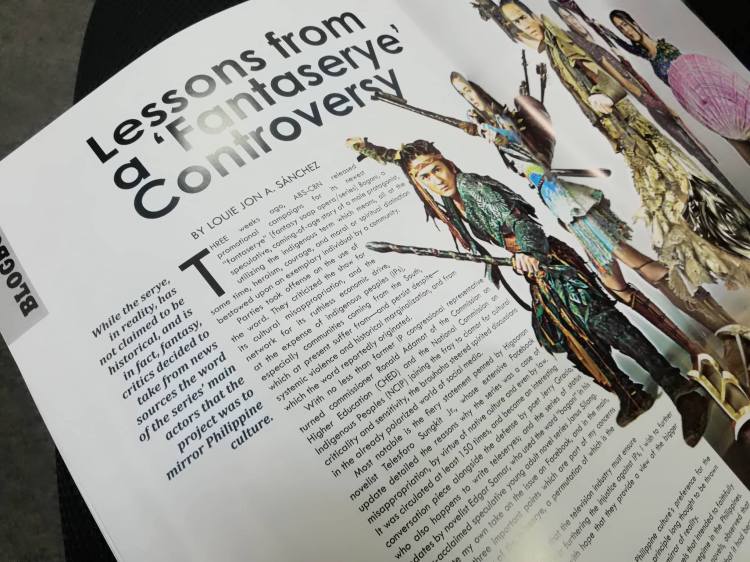 Three weeks ago, ABS-CBN released promotional campaigns for its newest “fantaserye” [fantasy soap opera/series] Bagani, a speculative, coming-of-age story of a male protagonist, utilizing the indigenous term which means, all at the same time, heroism, courage, and moral or spiritual distinction bestowed upon an exemplary individual by a community. Parties took offense on the use of the word. They criticized the show for its cultural misappropriation, and the network for its ruthless economic drive, at the expense of indigenous peoples (IP), especially communities coming from the South, which to the present suffer from—and persist despite—systemic violence and historical marginalization, and from which the word reportedly originated.

With no less than former IP congressional representative turned commissioner Ronald Adamat of the Commission on Higher Education (CHED) and the National Commission on Indigenous Peoples (NCIP) joining the fray to clamor for cultural criticality and sensitivity, the brouhaha steered spirited discussions in the already polarized world of social media. Most notable is the fiery statement penned by Higaonon novelist Telesforo Sungkit Jr., whose extensive Facebook update detailed the reasons why the series was a case of misappropriation, by virtue of native culture and even by law. It was circulated at least 150 times, and became an interesting conversation piece alongside the defense by poet Jerry Gracio, who also happens to write teleseryes; and the series of status updates by novelist Edgar Samar, who used the word “bagani” in his highly-acclaimed speculative young adult novel series Janus Sílang.

I wrote my own take on the issue on Facebook, and in the main, focused on three important points which are part of my concerns as a researcher of the teleserye, a permutation of which is the “fantaserye.” While I definitely agree that the television industry must ensure that it does not participate in furthering the injustice against IPs, I wish to further expound on the said points with hope that they provide a view of the bigger picture.

This Bagani episode is an illustration of Philippine culture’s preference for the realistic, for verisimilitude, and for that literary principle long thought to be thrown out of the window by critical theory—literature as mirror of reality. We may fault José Rizal for leaving paragonal novels that intended to faithfully expose the abuses and excesses of the Spanish colonial regime in the Philippines. The critic Caroline Hau, in her germinal study of Philippine novels, observed that novel writing in the country tends to be haunted by history, and that it had become necessary for Philippine fiction in general to represent the realities of time.

The complaint lodged against the fantaserye, denouncing it for not being faithful to the cultural origins of the concept of “bagani” is a symptom of this. While the serye, in reality, has not claimed to be historical, and is in fact, fantasy, critics decided to take from news sources the word of the series’ main actors—most unreliable to speak about the serye—that the project was to mirror Philippine culture.

The criticism is valid, but must also be re-examined, especially if we consider the prevailing attitude to other forms of literary representation currently being explored not only by our fictionists but also by writers involved in teleserye production [and most times, they are the same people]. The serye’s incident is instructive not only because it reiterates literature’s being a mere artifice of language and a frame [among many frames] of reality, but also reminds of the pleasures we derive from fiction—whether it be “literary” or “popular.” The so-called non-realistic literary modes popularized by science fiction, fantasy, and magic realism must also be accepted as believable frames and equally thrilling.

In fiction, we also suspend our disbelief and submit to the rules and logic of the narrative—an interesting illusion. Part of it is also the need to be mindful—at least in our preliminary approach—of the basic difference between fiction and fact. Fiction is composition and fabrication that may make us look at truth and reality more sharply and discerningly. Reminding ourselves of fiction’s compositionality is key in avoiding what I want to call the fallacy of narrative conflation, as committed by Adamat: “I cannot tolerate the public showing of the said teleserye as long as ABS-CBN would not revise the format and concept in order to render “Bagani” to become as educational as it can be, and make the same as historically-accurate and culturally-correct presentation of what the real “Bagani” is from an IP perspective.” Approaches vary depending on the narrative ploy, and narratives must be considered according to their logic. Adamat’s position is simply a naive imposition.

What is this falling for the fallacy of narrative conflation after all but a symptom of the systemic failure of Philippine education? We must admit that miseducation in general, and in literature in particular, made some who participated in the discussion, conflate as well, the indignities experienced by IPs with that of the fiction and world-making of the fantaserye. I accept the problems and politics of representation as tenable concerns. As Filipinos believing in the dignity of the person, we must all rally against all forms of injustice. However, our miseducation in literature not only led some of us to think that there is but a limited set of looking at reality; it also instigated the presumption that literature only works around a limited set of functions and fixed meaning systems as well—a total contradiction to what it is, an endeavor of the imagination.

This failed literary education persuaded many to believe that literature is merely a mirror of values from which we must reflect on our lives and realities. The quotation from Adamat clearly shows this. In this position, narrative relevance is anchored on lessons or morals a story can impart, as the text may also be easily dismissed in favor of harried and oftentimes fervid reception. A trailer, some posters, and interviews of actors seem to be enough materials to approach and pass value judgment on a text, even if it is yet to air—an injustice in itself. This persuasion is deplorable.

Meanwhile, about fixing meaning systems: while it is imperative that we press any party engaging indigenous cultures to afford informants utmost reverence and nuance, I also urge a review of how we mean—and how we make meaning—in our archipelagic context. The data retrieved from dictionaries and studies from other Philippine languages by participants in the discussion showing “bagani” as shared culture are proof that exclusively marking the boundaries of the indigenous may be regressive at this point, considering the unfinished project of nation-building and the perils of globalization. Simply put, we cannot afford to insulate in this day and age.

Sungkit’s response points to this, as well as the emotional stand by the NCIP. However, the said problematic appropriation by the serye must also be seen as an opening to dialogue—to bridge the present and the past; and also, mainstream and indigenous cultures. No matter how contrary to my position, Sungkit’s stand is, I believe, the most instructive among the lot. While emphasizing the need to protect indigenous culture from new and equally oppressive forms of “colonialism,” it also provided a window from which the issue must be framed. What we didn’t get in any classroom, the good novelist’s discussion provided in full. Warts and all, including the reactionary drivel from the ill-informed and professional trolls, the dialogue made up for our education’s many failures.

Looking down on popular culture

Another failure of literary education in the Philippines is the pervading contempt for popular culture, like teleseryes, which can never ever become literature. Appropriations of cultures into newer and more specultive literary forms may yield critique, but perhaps not as widescale as the one stirred by Bagani in social media. My instincts tell me that “literature”—its creative, written, and published form deemed for a more select, “academic” readership—draw little flak in cases of appropriation, as compared to its lowly opposite, popular texts; though of course, I am speculating. It is warranted though, as creative writers may find it fairly easy to raise their creative licenses, and insist that in the realm of the imagination, freedom of speech and artistic expression [informed by criticality and nuance, of course] is important. Part of this freedom is the freedom of material exploration, even of borrowed or foreign cultures. Why then can’t this be applicable to the teleserye?

I look at Bagani and can’t help but see the enduring public reception of popular texts like teleseryes as simply obtuse and only driven by an “economic imperative,” quoting the American soap opera historian and media critic Robert Allen. In my on-going study of the history of the televisual form, however, I saw as complex and engrossing, the soap opera’s beginnings as an imported radio product; its evolution in television according to political economy [audience behavior, market movements]; and its contribution in shaping Philippine culture. This compels me to carry on with my argument that it is a text worthy of critical attention. A comprehensive history may change people’s minds [that’s what I’m hoping to finish and do soon], but I am also managing expectations.

Years of theorizing, even in the West, were not able to completely dismantle the high art-low art dichotomy. Many still subscribe to the notion of “culture industries” as “mass deception” championed by Theodor Adorno, one of the founders of the Frankfurt School which pioneered the revaluation of popular culture using critical theory. In spite of this, I still consider this episode—an unprecedented one in televisual history—a testament to how popular culture persists as a site of struggle, dialogue, and positive change, as a whole gamut of texts that stimulate engagement. Popular culture remains to be a site of convergence despite public denigration.

The mere fact that it generated intense debate and writing underline its impact, which consequently encouraged renewed interest not only in the plight of IPs, but also in the politics of creativity and representation, as well as the burgeoning culture industry of the teleserye.

Undeniably, the “fantaserye” yielded dialogue that is as stimulating as the ones from current affairs—like the resolve to fight fake news, call out historical revisionism, and resist the creeping dictatorship. However, if it is to be believed that teleseryes are optimally allegorical, this series is subversively attempting to “narrate,” in its own mode, the story of the present. In its first episode, Bagani raised the question of honor among the lead characters composing the imagined community. What issues of honor [or the lack of it] need confronting nowadays? How does it relate to the IP issue? How is the serye symptomatic of the state of the nation?

The teleserye is polysemic, saying and meaning so many things all at the same time. We must therefore get out of television’s traditional box of idiocy and become its intelligent interpreters.